The early nineties battle between the Genesis and the Super Nintendo could be generalized as a choice between competence and creativity. The Super Nintendo had the games that were technically “better” – familiar, well-executed titles in established genres, while the Genesis had the games that were more innovative – original concepts, ports of PC games people had assumed would never work on a console, and radical blending of genres. This divergence wasn’t intentional; Nintendo didn’t get all their management together in a meeting one day and decide “Hey, you know what? Fuck originality, we have Zelda.” But as time went on, the SNES fell back on its experienced publishers and well-known franchises, while the Genesis countered by becoming a breeding ground for new ideas.

Of course, establishing your console as a haven for unique games is no small feat in an industry where the mushroom-fueled exploits of an Italian plumber through a pastel-colored acid trip are considered “normal”. You need to seek out designers who have original ideas and nuture them. Then you need to back off and let their creativity flow. And most importantly, you need rapping aliens from a distant planet called Funkotron. Enter Toejam and Earl:

If you’re looking for an explanation as to why people regarded the Genesis as the home of innovative gaming, you’re not going to find a better one than this

Now to be fair, it’s not like people lined up and chose to buy a Genesis over a SNES based on TJ&E. But just having it in the Genny’s library made people appreciate the system more. It was different… really different. This was a game that practically screamed “You’d never see anything like this on the Super Nintendo,” which was appealing to a certain set of gamers and helped build the Genesis’ reputation as the more innovative console.

Even people who had never played the game loved the two characters, but what truly makes TJ&E unique is that it genuinely isn’t like most other games. First of all, it’s hard to even classify into a genre. The best description is probably to call it a scavenger hunt – you explore each level, try to avoid enemies whenever possible, and seek out parts of your missing ship and the exit to the next stage. There isn’t much combat, and the best survival tactic is generally to give your foes as wide of a berth as possible. It’s not a completely unfamiliar concept – a lot of us play a game like this in real life called “going to visit that friend who lives in the sketchy neighborhood” – but generally speaking, this isn’t how video games work. Usually, obstacles (and enemies) are to be dealt with directly, and levels are simply a means to take the player from one challenge to the next, not the core of the game in of themselves.

Oh sure, it looks weird here, but within the context of the game, this nearly makes sense.

The unconventional approach of TJ&E might sound kind of boring, but the game makes up for it in a lot of ways. The simple act of walking around and exploring is far more interesting than you would expect, mostly because everything in the game is so weird that you really never know what you’ll find next. But the game isn’t just weird for the sake of being weird, Toejam and Earl is one of the few games in existence that is genuinely funny. From the odd enemies (such as the shopping cart pushing lady who ignores her screaming toddler, except to occasionally yell at him), to the sound effects (the maniacal laughter of the crazy dentist is awesome), to simple things, like watching Earl hula dance (or just the idea that hula dancing is “contagious”), this game provides plenty of humorous moments. And in the end, it is the humor that makes playing the game so damn entertaining.

Besides, by flipping the concept of a game on its head, it makes everything feel more “alien”, which is one of the things that Toejam and Earl does really well. Games have all kinds of ways for getting you to identify with the characters you control – by giving them elaborate back stories, by setting the game up around a captivating narrative, or simply by giving the character traits likely to be shared by the player or someone they know. Toejam and Earl goes one better by giving the player a gameplay experience that’s quite similar to what the characters themselves are going through. Not only is the gameplay unusual, but the landscape of this “Earth” that they are exploring is vaguely familiar but ultimately quite different from the planet we call home. People attack them for seemingly no reason and it’s often difficult to tell friend from foe. The entire world is strange and confusing to the player, which is also exactly how it would feel to two aliens that had crash-landed here from another planet.

Of course, you can’t have a game about two rapping space aliens from the planet Funkotron without some appropriate music, and in this regard the game is… well kinda minimalistic, actually. There are only 2 songs that get played often, one is an 80s hip-hop inspired track that plays between levels and whenever you get a really awesome powerup, and the other is the main theme, a catchy little funk tune that basically plays whenever the other song isn’t (about 90% of the time). That’s not a whole lot of songs for a game that at its core is about music (did I mention that TJ&E are trying to reassemble their spaceship, and most of the missing parts are speakers?), but it works fairly well. Due to what I can only assume is black magic, the main theme somehow doesn’t get annoying and repetitive, and the other song provides just enough variety. There’s also a little minigame where you can make up your own raps by pressing buttons to play sound effects over a background beat, you know, for those times when you just have to hear someone yelling “Big Earl” in a deep voice over what sounds like the preprogrammed melodies from a Casio keyboard.

It took me twenty years to beat this game, you’re damn right I’m showing a picture proving it.

A big portion of the game’s humor and charm comes from the graphics. While they aren’t exactly spectacular, the cartoonish art style fits the theme of the game well (a super-realistic look for a game like this would probably be pretty scary, actually). More importantly, the animations are superb. Watching Toejam make a “hallelujah” gesture after getting an extra life, or seeing Earl float around in an inner tube is funnier than you would expect. However, it’s the enemies that really benefit from this treatment, as many of them have interesting behaviors, and as dangerous as they are, you still almost want to hang around them just to see what crazy things they do. I’m assuming this is the same reason people keep cats as pets.

In other words, there’s a lot more artistry involved here than what you might expect from a game about rapping aliens. You can tell that somebody put a lot of thought into the game, figuring out ways to make the game weird, the characters interesting, and the gameplay unique. That’s a part of the appeal of the game, too – knowing that not only are you getting fun, unique gameplay, and an interesting experience, but just taking a moment to appreciate that you’re getting somebody’s best effort at making a video game. That’s not a feeling you get while playing, say, Crystal’s Pony Tale. 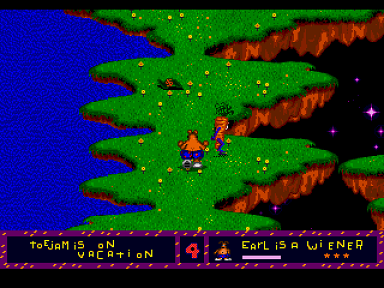 Earl sneaks up on an old man in a carrot suit. Just go with it.

Availability: Toejam and Earl came out before the Genesis really caught on, and wasn’t a huge seller, but enjoys a real appreciation among gamers these days. Unfortunately, that combination means that copies of the game are hard to find and expensive. This rarity is somewhat compounded by the fact that Greg Johnson, one of the original designers of the game, retained the rights to the characters. Because of this, it isn’t available on any of the Sega compilations (even though Sega originally published it for the Genesis), and the only re-release we know of is for the Wii’s Virtual console (at a price of $8).

However, for those of you without Wiis, playing the game means buying a Genesis copy, and that’s easier said than done. Stryker only had one ever come through his store (which he snatched up for his personal collection), and in our searches for it, we only found a single used game store that had one – which they kept in a fancy glass case away from all the peasant games like Sub-Terrania, and were selling for $35. Buying a copy online looks to set you back at least $15, and more likely somewhere in the $20-$25 range.

2 thoughts on “Toejam and Earl”