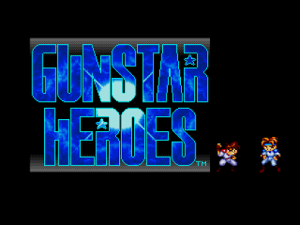 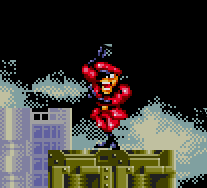 Before we get started, I should let you know that I’m not totally clear on the storyline of Gunstar Heroes. There’s a guy in a red military uniform trying to take over the world (this was apparently a pretty big concern in the post Street Fighter 2 era), and there’s some gems you’re trying to find or something and then… you shoot things. That’s really the most important part of the story. I could tell you that I’m not perfectly clear on the details because the game went through a somewhat incomplete rewrite of backstory when it came over to America, but the truth is, I was too busy shooting stuff to really pay much attention anyway. So let’s just say that this is a game in which you prevent a bad guy from taking over the world by retrieving some gems before he does. And you retrieve said gems by blasting the crap out of everything you see… you know, the way God intended.

I know we discussed this earlier when we reviewed Shining Force 2, but I still don’t know why gemstones keep getting used as the key to taking over/destroying the world. Gems aren’t inherently dangerous or powerful – nobody’s ever made a nuclear bomb out of rubies, or successfully harnessed an emerald’s mind control powers (I suppose you could make an argument of diamonds’ behavior to make people act in irrational ways, but even so, De Beers hasn’t been able to take over more than a few small third world countries). Likewise, weapons grade plutonium doesn’t have an attractive sparkle and isn’t something you’d carve into a stunning necklace. So lacking this natural tendency to be dangerous or powerful, we must assume that people are taking ordinary gems and enhancing them with incredible powers. 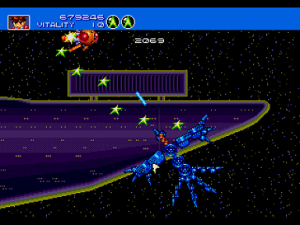 See that gigantic robotic bird with all the firepower? Yeah, it’s chasing you.

But this doesn’t make a lot of sense, either. It would better idea to imbue these powers into something more ordinary such as, say, a salad bowl. See, unlike a salad bowl, gems tend to be both small and valuable.  This makes them easy to lose, and more likely to be stolen. Sure, there are some larger gemstones out there, but those just end up being even more valuable. It’s bad enough that as a powerful artifact, there are going to be people out there who know what they’re capable of and will try to steal these things. No need to make them attractive to people who don’t even realize they’re super-powered. The last thing you want is for some team of jewel thieves to pull an Ocean’s 11 style heist on the Diamond that Rules the Entire Freaking Universe, and next thing you know, George Clooney and Brad Pitt are calling all the shots. 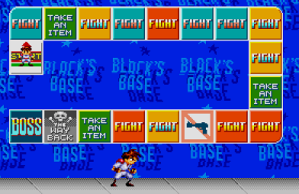 On the other hand, when’s the last time someone tried to steal your salad bowl?

Besides, think of the start-up costs it would take to enhance a large ruby with world destroying powers. First, you have to obtain a pretty large ruby, and that’s no small task. “Fist-sized” is considered insanely large for a jewel, and most of the ones you see in video games are at least the size of your character’s head. Something like that would probably cost millions of dollars. That’s well out of the question for the average citizen, meaning it could only be done by a very large corporation or the government. Could you even imagine the uproar in Washington if the government did that? I can see the ads now: “In an time of increasing government deficits, Congressman Smith voted to spend your tax dollars to buy himself million-dollar rubies…” And large corporations are generally a lot more cost conscious than the government. All it would take is one decent accountant in the company to point out that hey, it’s a hell of a lot cheaper to power up the filing cabinet over in the corner than it would to buy the Hope Diamond and give it magic properties.

Silly plots concerns aside, Gunstar Heroes is a fantastic game, and easily one of Treasure’s finest efforts. And when I say it’s one of Treasure’s finest efforts, I mean for that to be impressive. This isn’t like when I say Batman Forever is one of Acclaim’s finest efforts, meaning that it was a bit better than Revolution X, but still well within that range of games that should be treated with the same sort of avoidance you would have toward a guy giving away candy out of the back of a nondescript panel van.

Here’s the thing about Gunstar Heroes – it’s filled with so many innovations that even today it still feels a few steps ahead of anything else being offered in the genre. And keep in mind that it comes from a time when people still thought full motion video was a great idea. Pretty incredible to think that while some companies were doing it so, so wrong (why hello again, Acclaim!), a few were coming up with games that seem innovative two decades later.  It’s pretty awesome to have a health meter instead of instantly dying every time you get hit, be able to fight enemies hand to hand up close, choose the order in which you play through the stages, and be able to combine powerups to create new weapons. Individually, none of these are ground-breaking improvements – I mean, it’s not like they did anything really radical like having you start from the right side of the screen and run to the left (because that would just be crazy right?), or have you NOT shoot things – but the total of the game’s many, many small improvements has the effect of making GS feel really fresh and original. It plays like Contra but feels vaguely like Megaman, and that’s not an easy thing to pull off. 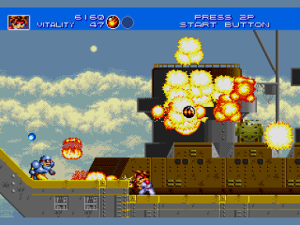 And about as explodey as both games combined.

That’s what Treasure does though, bless their little hearts. They just keep trying to drag video games kicking and screaming into the future, and hardly ever having a big commercial success to show for their efforts. That’s kind of the downside of this approach to game making – it takes a real experienced gamer to appreciate all that’s going on here. It’s easier to get people excited about a really groundbreaking game that’s drastically different from anything we’ve seen before (Doom, Metal Gear Solid) than it is to take a well-established genre, take it all apart, and rebuild the whole thing with better parts. To fully appreciate how excellent Gunstar Heroes is, you sort of need to have seen a dozen similar games do it less well. This earns them a lot of cred with hardcore gamers and the gaming media, but it isn’t getting them onto any bestseller lists.

It’s tempting to think of Treasure as some sort of purely benevolent game design studio, flitting from genre to genre, seeing which types of games are in need of some innovation and attempting to show us all the way to a brighter future. They get little in the way of a reward for their efforts other than the gratitude of a dedicated few, but that’s ok, because they’re really just in it for the games, man.  And maybe that’s really the case. Or maybe not. Maybe these games sell like gangbusters in Japan, and releasing them to critical acclaim and modest sales in the US is just a way to establish a pipeline in case they suddenly get a wild urge to release a football game one day. Or who knows – maybe games like Gunstar Heroes and Mischief Makers represent their best attempts to “sell out” and make a derivative, commercially viable game, and they just don’t know any better. Ultimately, it doesn’t really matter what their motivations are, just be glad that a few developers like this still exist. 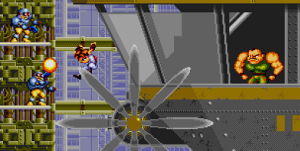 Availability: Possibly due to the somewhat unusual relationship Treasure has with publishers – they’re sort of a freelance design studio that doesn’t work with one publisher exclusively the way most do – Gunstar Heroes doesn’t appear in any compilations that we know of (in the US, anyway). It is however, available as a download for the Xbox 360, PS3, and Wii, making it one of the more accessible Genesis titles, and an absolute bargain at the price. We also recommend these versions because the ability to save at any time takes some of the frustration out of the more difficult parts (and believe me, there are some difficult parts).

Those of you looking for a Genesis copy should be a little bit careful, though– this is exactly the type of game – somewhat hard to find, with a cult following – that makes some unscrupulous sellers’ eyes light up with dollar signs. The game is a little bit rare, but by no means impossible to obtain, so don’t listen to the guy charging $40 dollars for a copy and telling you it’s the only one you’ll ever see. You should be able to find a few copies online or a some of the better used game stores. A decent one will probably go for at least $15 and usually closer to $20-25. A bit pricey, but not outrageous. 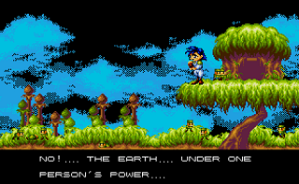 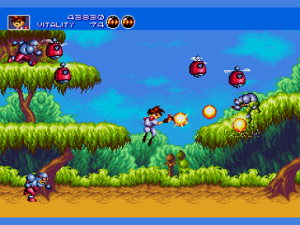