The best way to describe Contra: Hard Corps is to imagine what would happen if, at every point during a game’s development cycle, the person in charge kept demanding his team “put more awesome in it”. And each time, the development team went back to their drawing boards, adding as much awesome as they could, until finally, instead of repeating his request for increased awesomeness, the lead designer’s head exploded. I have no idea if that’s how the game was actually made, but it’s almost impossible to imagine any other method producing a game like this. Contra: Hard Corps is one of the most fast paced, intense, over-the-top crazy-ass games I’ve ever played, not just on the Genesis, but for video games in general.

And if it wasn’t for him, I’d have been married a long time ago.

For those of you who haven’t played it, he’s a quick recap: You begin the game running through a gauntlet of enemy fire while mowing down a small army, before fighting a giant metal ant that shoots lasers, and then run through an earthquake to fight a flame-throwing robot that breaks through a building just to get at you. Killing that tips over another building that you run up the side of in order to fight a 10-story robot that fucking throws cars at you.  From there you ride a giant propeller as it crashes into the ground, before fighting a guy in a metal combat suit with sword hands, which he uses to cut down a skyscraper.

Wait, is he throwing a car at you? Are you playing as a Wolfman? Holy shit! This game is insane!

Contra: Hard Corps almost entirely without filler. It doesn’t believe in giving you a chance to warm up, or throwing in a few slow sections after a tough battle to let you catch your breath. You just jump right in and go from a crazy boss fight, to an even crazier boss fight, to a “Holy shit, did that thing just burn down an entire city?” boss fight. In between there might be a few areas where you ONLY have to fight through a few dozen cannon-fodder type enemies while they try to fill the entire screen with bullets, but those are basically just there to provide a point of demarcation between one epic battle and the next. In a normal game, those parts would be a congratulations screen. 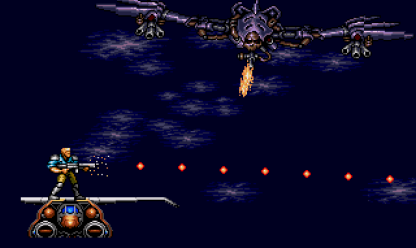 And in a normal plane, you’d stand inside.

And just when you think “How could this get any crazier?” you get into a fight against the signs of the Gemini. That means this is a game where you even kill constellations. There isn’t even a word for that kind of ultra madness.

Probably because this has never happened before.

Now anyone familiar with the series already knows that the word “Contra” is basically video game language for “ridiculously hard”. But not even the Contra name can come close to conveying the degree of difficulty we’re talking about here. Calling Hard Corps the most difficult game in the Contra series is like calling Michael Jordan the best player on the early 90s Chicago Bulls or The Fonz the coolest guy on Happy Days. All are true statements, but they fail to convey just how wide that gap is between it and whatever comes in 2nd (Contra III, Scottie Pippin, and Mr. Cunningham, respectively). Until you’ve seen it firsthand, you just have no idea.

You made it mad! Run!

Contra: Hard Corps is difficult on an apocalyptic scale. It’s so tough that even Randy “Macho Man” Savage would think twice about messing with it. Before operating, brain surgeons calm themselves down by telling each other “What are we so worried about? It’s not like we’re playing Contra: Hard Corps.” Loan sharks carry copies of this game around to intimidate people who owe them money. Advanced Calculus thinks this game should ease up a bit.

Don’t believe me? Keep this in mind: This game is so damn hard they had to make it easier for the Japanese market. That means somebody over at Konami took one look at the game and decided that even though it was good, there was no way anybody in Japan – you know, that country where people can actually beat all those impossible shooters like Ikaruga without continues and they had to invent 3 new letter grades above “A” to rank their performances in Street Fighter matches – was going to play it unless they made it a little easier. That’s how hard this game is.

All we’re saying is that we sure as hell wouldn’t buy a used car from anyone who’s ever claimed to have beaten this game.

Unless they were chasing us while holding a bomb over their head.

Anyway, whether or not this level of challenge appeals to people is largely a matter of preference, and in the game’s defense, it might be tough, but for the most part, it is fair. There aren’t many virtually unavoidable deaths or cheap shots, and as long as a player pays close attention, plays skillfully, makes good decisions, recognizes the boss’ patterns, and has ninja-level reflexes, he has a fighting chance of lasting more than two minutes. Still, this is a tough game to recommend wholeheartedly, as anyone other than the most hardcore gamers are going to struggle to get to even the third level. Stryker and I ranked it behind the similar but more approachable Sunset Riders (also from Konami) which, though less ambitious and certainly not as intensely paced, is also not nearly as demanding.

Contra: Hard Corps is a somewhat rare game, which I find a little bit surprising because when I worked at EB, the company discovered a huge cache of them (along with Jungle Strike) in one of their warehouses back in 1999, and sent them off to stores at clearance prices, despite it being five years after the game had come out, and also long after EB had stopped carrying anything Genesis (we weren’t even sure where to put them). So I had always assumed that this was a game for which there were more copies made than people who wanted them. Apparently not – this game is hard to come by. Stryker only had two copies come through his store while it was open, and expeditions I’ve made to local stores proved fruitless.You might be able to find a copy at a really good used game store, and there are a few floating around online, but be ready to pay at least $10, and probably closer to $15 (or upwards of $20 if you want a complete one, with a box and instructions). As far as I know, it isn’t available to download for any console (though the game’s sequel, Hard Corps: Uprising was just released for the Xbox 360 and Playstation 3), and hasn’t been included in any kind of compilation.

Personally, I think that’s a little steep for a game that you might not get very far in, especially when you can get a better price on Sunset Riders and can download Gunstar Heroes or Contra 3. Still, if you can find a good deal on it somewhere, or can borrow it from a friend like I did, it’s definitely worth a look, if only to see just how outrageous a Genesis game can get.