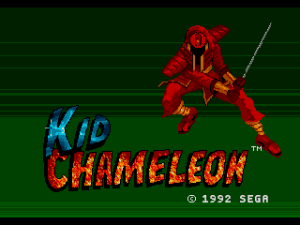 Let’s start this entry to our Top 50 with a little test. I’m going to show you a picture and I want you all to make a note of the first word that pops into your head. Ready? Here goes:

Some of you might have thought things like, I don’t know, “battle”, “courage” or maybe even “Genesis game”. The rest of you just fell on the floor and began screaming involuntarily. If you’re in the second group, then congratulations, you’ve been scarred for life by Kid Chameleon. Which is pretty much the same thing as saying that you’ve played it at all.

For the non-screaming readers, a bit on an explanation: Hills of the Warrior is a stage fairly early on in Kid Chameleon that offers up your first real taste of what the rest of game has in store. It’s an absolutely brutal stage filled with enemies, spike traps, disappearing floors, and, oh, the first appearance of a little something known as the “Murder Wall”. The Murder Wall is every bit as festive as it sounds – it’s an unstoppable barrier of drills, saws, and spikes that travels relentlessly across the stage, forcing you to adopt an uncomfortably brisk pace and punishing almost every misstep with a horrific death. The worst part of the Murder Wall is that there’s almost always a few seconds between the time when you realize you aren’t going to escape it, and the point where it kills you. Those are an agonizing few seconds – I’m not normally one to get too empathetic about game characters, but I have to admit to feeling guilty each of the countless times I trapped my guy in some area he wasn’t going to escape in time. Sorry Kid Chameleon, I’ve killed you again, and in pretty much one of the most horrifying ways imaginable.

I was too busy running in terror to get a picture of the Murder Wall, so here’s Kid Chameleon turning into a tornado.

The Murder Wall only shows up on a few stages, but that doesn’t mean the game gets any easier. A few levels after Hills of the Warrior, you reach a stage called Dragonspike, which is essentially the point where the game looks back over its shoulder at you and says “Oh, you’re still here? Alright then, it’s on now.” and throws a controller-breaking series of jumps your way. Keep in mind, this is all before you even reach the first boss. Which is three severed heads with glowing green eyes, floating around on a spear, because if this game can’t break your will, it’s sure as hell going to try breaking you psychologically. You might play it on a Sega Genesis, and that Genesis might be plugged into the wall for electricity, but make no mistake, Kid Chameleon is powered by nightmares and children’s tears.

At first, I thought the bottom head was screaming, but it turned out that was just me.

So far, this sounds more like a title we would be revoking the seal of quality from rather than the fourth greatest Genesis game of all time. But here’s the thing – Kid Chameleon is brilliant. The game puts on an absolute clinic in level design, to such a degree that playing it should be a requirement for anyone seeking to get a job making video games. There isn’t a single level in the game that feels rushed, or bland, or careless. Nor do they start to feel repetitive – not a single stage in Kid Chameleon makes you think “Oh, it’s another one of these levels.” That’s a staggering achievement for a game that boasts over 100 stages. Admittedly, about a fifth of them are minor secret levels used as shortcuts, but that’s still 80 or so different stages, each thoughtful, challenging, and unique. That’s an incredible achievement.

To be fair, most of the stages aren’t as hard as Dragonspike or Hills of the Warrior. And even at it’s toughest, the game never really gets frustrating. Part of the reason is that it’s just so much fun that you want to keep playing despite the difficulty. The gameplay was pretty much lifted straight from Super Mario Bros. 3 (and if you’re going to shamelessly mimic a game, that’s a pretty good one to go with), with platforming, block breaking and collecting powerups that give you different abilities. The other thing that keeps it from getting frustrating is that most of the stages can be cleared in just a few minutes, so if you keep dying and have to repeat a section over and over again, you’re not doing a ton of backtracking. Get through a tough stage, and you can breathe a sigh of relief knowing you won’t have to deal with that ever again. Oh sure, the next stage is just going to bring a whole new set of terrors, but at least they’ll be different ones.

Kid Chameleon’s gameplay centers around collecting “masks” which alter your appearance (they’re more like full costumes) and give you different powers, such as jumping higher or throwing projectiles. One of the best things about Kid Chameleon is the variety – there are several different masks, such as the samurai, who has a sword and can jump really high because… that’s what… samurais are best know for? Jumping high? There’s also the ram who can break blocks by charging into them, and the tank, who’s power is seeming awesome but then usually being kind of sucky.

Although it doesn’t have the best graphics seen in a Genesis game, Kid Chameleon is still quite appealing visually. There is a great amount of variety between the different stages which keeps things interesting, and the game does a great job is making the color palette (as well as the music) feel appropriate

to the stage. Underground areas and dark and muted, while tropical scenes make use of bright, warm colors. There are a lot of nice little touches as well, detailing on some of the ruins, and ice levels which feature creatures that have been frozen solid in the background, and the creatures in question are enemies from other stages. Each level seems like it would have it’s own little back story, which is a nice touch.

Even the screens used to introduce each level are interesting. Simple images like these not only give a hint to the environment ahead, but also convey a sense of foreboding at what’s to come.

Kid Chameleon’s lack of passwords or save games is its most significant, and puzzling, flaw. I’m not sure why anyone thought it was a good idea to make a game with over 100 levels, many of which are pretty hard, and no way to save

your progress. It’s not like they didn’t have the technology back then – the ability to save your game to the cartridge was fairly common in Genesis games and dates back to the 8-bit era, so this wasn’t a novel concept in 1992. So it’s almost certain that this was an intentional choice, perhaps to follow in the steps of other platforming games that had influenced it, as well some of Sega’s other offerings. It’s worth noting that Sonic, Streets of Rage, and Toe Jam & Earl didn’t include saving or passwords either, so it’s possible that Sega was just waging some kind of crusade against everything else in our lives that wasn’t video games. Even if you have to skill to beat the game, just sitting down and playing through it requires about 3 to 4 hours of uninterrupted free time, which can be incredibly challenging in a completely non-game related way.

Fortunately, rereleases of the game, such as for the Wii’s virtual console or as part of Sonic’s Ultimate Genesis Collection for the Xbox 360 and PS3, allow for saving. So this is one of the rare cases where a game actually got better over time. If we were rating Kid Chameleon based solely on the Genesis version and nothing else, it would probably have scored a full letter grade lower, and finished about 20 places further back on the list. 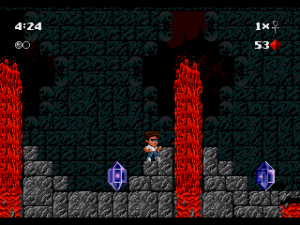 “Oh, just another game where you jump over lava and fight diamonds,” said no one, ever.

Of course, we’d be letting you all down if we spent this much time talking about Kid Chameleon without mentioning it’s story. Basically, a nearby arcade gets a new virtual-reality type game that people can walk into and play, but it turns out that if you lose, you become trapped in the game. And this was before the ESRB, so it’s not like there was a warning or anything. The only way to rescue the kids who have been abducted is to beat the game (this was kind of a thing at the time), which is where you come in. So this is a game about playing a game, kind of like Assassins Creed, except less stupid. Well, no, actually those games are about equally stupid, but at least with KC, once you get past the intro screen you never have to think about it again, unless you get to the ending, which nobody ever does anyway.

Why does the game want to kidnap players? Kid Chameleon never explains that. Or where it puts its victims, or what it would do once it was full. The short explanation is “because if it was killing people, you’d just unplug it, and that wouldn’t be much of a game.” Still, if it was killing gamers, you could at least blame it on faulty machinery, or the simulation being “too real”. This is just an arcade machine that wants to abduct people… for some reason. So no, the story to Kid Chameleon doesn’t make a ton of sense, but at least it kind of explains why the game can be such a motherfucker at times.

Even Kid Chameleon doesn’t know what to make of this.

Availability: Kid Chameleon is available for the Wii’s Virtual Console, and is included as part of Sonic’s Ultimate Genesis Collection. I know I’ve been shilling pretty hard for Sonics UGC throughout this feature, but only because it is a great option for playing many of the games on our Top 50 list. Besides, if you’ve been paying attention to the review at all, you know those versions are the ones to get. I can’t possibly overstate how much better being able to save makes this game.

However, if you just want an original copy for your collection, or if you’re some kind of militant Genesis gamer who refuses to play the game on any other platform and has resigned himself to never beating it, at least it won’t be too expensive. Kid Chameleon wasn’t a huge hit when it came out. Part of it might have been a lack of advertising, part of it might have been the brutal difficulty and lack of passwords, and part of it was probably that it was named fucking Kid Chameleon and the box cover looked like a horrendous 80s movie starring Corey Feldman: 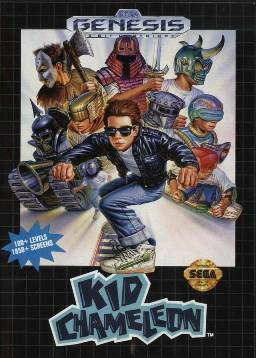 Man, if this is what they went with, I’d hate to see the rejected covers.

Anyway, I’d call this one moderately rare, with copies being sort of hard to find, but not exactly sought after, either. Last time I checked, there were a handful of copies selling online, and you might be able to find it at a decent used game store. Tracking down a decent copy could take a little while, but probably won’t cost more than $10 or so. And if none of the copies you find come with the box, at least you know you’re not missing out on much.