Populous is an interesting little game. It’s a real-time strategy game in which control over your units is indirect – you can influence their behavior in a general sense, but they behave on their own, leaving the micromanagement largely out of your hands. The PC version also came out a little bit before Herzog Zwei, meaning that all of the people who credit Herzog Zwei as being the first RTS really ought to be giving that acknowledgement to Populous. Well, actually, they really should be giving that credit to The Ancient Art of War, but since only about 10 people have ever even heard of that game, let alone played it, we’ll just pretend AAoW is imaginary. Populous was also one of the first games designed by overambitious genius (or pathological liar, depending on your point of view) Peter Molyneux.

It was also widely recognized as the first game where you play as God, though that distinction should probably be considered a tie with SimCity, which also came out around the same time (1989 was kind of an awesome year for games). Technically, in SimCity you play as a mayor, not God, but anyone familiar with city governments knows it generally takes divine intervention to get even minor tasks done in local politics, let alone build an entire city. Chucking around lightning bolts and flooding the entire world are nice tricks, but getting a new train station built into an already developed downtown area is closer to an actual miracle. 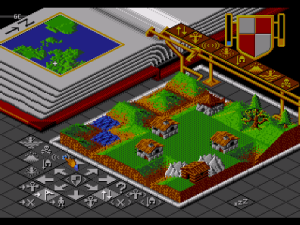 Anyway, Populous is a game where you play as God, or more accurately, a god, because on each level you’re competing against a rival divine being for control of the world. As the Blue (or Good) God, your objective is to lead your followers (the blue tribe) to victory over the competing red tribe, who naturally worships the Red (Evil) God. Each level is completed once the Red God no longer has any followers.

In other words, you win by having your followers kill every single person that is a different color and worships a different god than they do. Your opponents don’t even have the chance to surrender or be converted over to your side, their only option is death. If this is starting to sound disturbingly similar to committing genocide, you can comfort yourself with the knowledge that the red tribe is trying to do the exact same thing to you, and also that they are “evil”. Yep, you just keep telling yourself that. 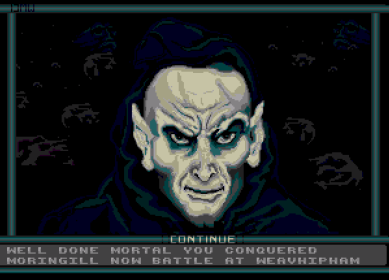 Wait, if you’re supposed to be a god, who’s this guy – your boss?

Your quest to wipe out an entire race of people is made easier thanks to some divine powers. After all, what is a God without powers? Hephaestus, that’s what. And nobody wants to be lame old Hephaestus. That’s why Populous gives you the following kickass abilities:

Change elevation – What do you do with the awesome powers of a god in Populous?

Mostly, you make nice, flat land for your followers to settle on. Flat land is really important, because it allows your people to build settlements, which generate mana, which is your power source. More flat land means bigger settlements, which generates more mana. It may not be glamorous, but it is the backbone of your overall strategy and a critical part of the game. Just don’t ask me why you didn’t make the land flat when you created the world in the first place – maybe you didn’t have enough mana then or something.

Maybe you could make it a little warmer, too?

As you’re about to see, this is pretty much the extent of you benevolent powers. You don’t really get to do much to help your people – there’s no healing the sick, or giving them something to wear other than loincloths, or sending your only son down to them to absolve their sins. Nope, in the world of Populous, God’s power for good is pretty much limited to being a divine bulldozer.

Changing land elevation is generally limited to areas near your citizens, so don’t get any ideas about going deep into enemy territory and digging a bunch of pits right at the beginning of the game. Once your followers and your enemies begin competing for the same land though, you may find the Red God trying to build up land at different elevations than you. Like most things in Populous, this problem is best solved by killing the fuck out of his guys.

Move Ankh – The Ankh is your holy landmark, and serves as kind of waypoint for your followers. Remember, for the most part you have kind of indirect control of your people, so moving the Ankh and telling everyone to go to it is a handy way to get them to migrate to a certain area. Admittedly, it’s not the most exciting godly superpower, but it does have a functional aspect to it. Plus, I like to imagine your priests trying to explain to your followers why you just declared the Post Office a sacred landmark that everyone needs to flock to immediately.

Quick, everyone to the lava lake!

Also, since societies in Populous are a Firstocracy, whoever touches the Ankh first gets to be your leader.

Earthquake – Now we’re talking! Earthquake is first real destructive power you get to unleash on your enemies and it is… well, it’s kind of annoying, I guess. Earthquake immediately alters the elevation of all land within a certain area, upsetting settlements and generally making a mess of that nice, flat ground your rival worked so hard to build.

Earthquake isn’t a bad way to slow down your enemy’s mana generation, but it’s really not much more than the equivalent of shaking up his ant colony.

Swamp – Creating swamps basically transforms an area of land into Florida, though with fewer flea markets. Not only do swamps interfere with settlements, but any person who steps onto a swamp dies instantly, regardless of how strong they are. Every so often, your enemy might build up a really strong leader who seems unbeatable in combat, murdering your followers and taking their houses at will. Let’s see how many fights he wins at the bottom of a bog.

For this reason, you might be tempted to use swamps defensively, like some kind of a moat. Unfortunately, swamps kill indiscriminately, so putting a few anywhere near your own land is just asking for your own followers to wander into them. Depending on the world, swamps are either shallow (once a person steps in them, they go away), or bottomless. Bottomless swamps could still fill the role as moats, with the added bonus of helping thin out the dumber members of your flock. Shallow swamps however, will clog up with idiots rather quickly, and disappear.

Knight – Using the this power instantly turns your leader into a Knight, a one-man wrecking crew intent on finding your enemies, killing them, and burning down their houses for good measure. These genocidal little maniacs can be devastating, but require a strong leader to be effective, which means sacrificing a large portion of your population in order to build them up. They also can’t swim, so if your enemies are on a separate island, Knights can’t do much until you build a land bridge, other than pace the shore impotently and wait for your rival to put a swamp in his way. 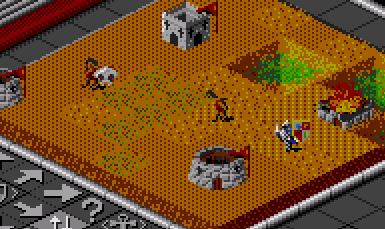 Volcano – Rivers of boiling lava run through your enemies towns. Clouds of burning ash incinerate your rivals instantly. The landscape is choked with poison… well, not really. Volcano just raises the elevation of the land in one area fairly significantly, and dumps some rocks onto the landscape. Volcano tends to be one of the Red God’s favorite tactic to use against you. Practically harmless, unless you get hit with a bunch of them all at once. 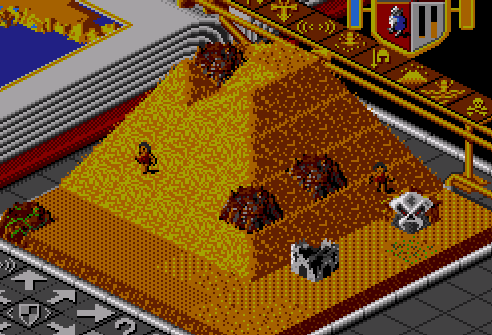 Flood – Flood basically raises the sea by one level, which causes everyone at the lowest level to start drowning. Depending on the world, they will either die instantly, or swim briefly, giving you precious time to find your followers and mock their plight as they struggle in the water. Guess you should have prayed a little harder, little blue guy. Or you can raise the ground underneath and save them, you know, if you’re one of those touchy-feely type Gods.

Look at those idiots trying to swim.

Flood requires a lot of advance planning (make sure your settlements at least one level higher than your enemy), but can be devastating. Even on worlds where followers don’t die immediately, your rival will probably still only save half his population, lose most of his land, and spend a ton of mana in the process. That’s a crippling setback, and Populous isn’t a game that lends itself to comebacks.

Armageddon – Killing an enemy tribe all the way down to the last man can be an exhaustive, time consuming process. If the genocide is starting to take too long, it might be time for Armageddon.  This ability to forces everyone in the world to immediately drop whatever they’re doing and start fighting each other to the death. Stryker refers to this power as “turn the world into Oakland”.

Populous is oddly fun for a game in which you spend much of your time landscaping. As a early RTS, it’s fairly simple, which may be a letdown to gamers with experience playing stuff like Starcraft or Age of Empires, but that also makes it a really good game to get started and learn on. As a 12 year old playing this game when it was still newish, I had no trouble picking it up and getting the hang of it. Why a 7th grader felt the need to play a game where he gets to be God is a question best saved for another day.

One thought on “Populous”