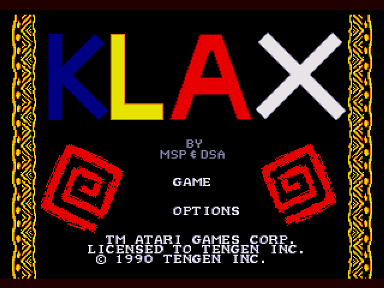 Back in 1989, Dave Akers, a game designer/programmer who doesn’t get nearly enough credit these days, was given the task of designing a puzzle game that would help Atari cash in on the Tetris craze. Nothing too ambitious here, just a little something to catch the overflow from people sick of waiting in line for Tetris and eager to get their puzzle on. The catch? Nobody knew how long this Tetris fad was going to go on for, so they needed the game to be made quickly. As in, a few weeks. Oh, and since this wasn’t a huge priority for the company (I assume most of their resources were being poured into manufacturing enough RoadBlasters cabinets to build a tower to the sun), he was going to have to make the whole thing almost entirely by himself.

No sweat. Sure, some of you may remember this “one guy made it in a couple of weeks” approach to game design as being one of the reasons that many early video games were so bad (including the Atari 2600 versions of Pac-Man and E.T., which nearly destroyed the industry), but those guys were amateurs compared to Dave Akers. We’re talking the guy who made Burgertime!, here. A few days probably would have been enough time for him to invent and program an adequate Tetris clone. Given a few weeks, he came up with Klax, a brilliant little game that stands out as one of the best puzzle games from an era that was saturated with them. A game so good, that right on its intro screen, it boldly declared itself to be the game of the upcoming decade:

For those of you who are bad at guessing, the answer is Klax.

History has failed to record what, exactly, Dave Akers did immediately after creating Klax, but we like to think Atari gave him some much deserved time off to lounge on beaches with bikini-clad women, light cigars with $100 bills, and just revel in the general awesomeness of being himself. And then, once he was good and refreshed, he could come back and go about the difficult task of porting Klax, the game of the 90s, onto the Atari 2600, the game console of the, uh, 80s… the early 80s.

No, of course I’m only kidding about that last part. I’m pretty sure he didn’t make a version of Klax for the Atari 2600. I mean, that would be crazy, right? To release a brand new Atari 2600 game in 1990? Dave Akers instead worked on the home versions of Klax for the Sega Genesis and NES – you know, systems that were actually being played at the time – while somebody else worked on the Atari 2600 version.

Because, oh yeah, they certainly did make one. 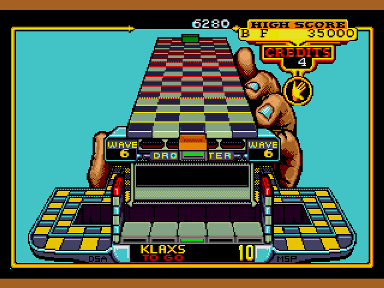 Klax happens to be the only game to ever be near-simultaneously released for the NES, Sega Genesis, and Atari 2600.  Though technical limitations meant the Atari version didn’t feature any levels held up by giant hands.

To put this into perspective for those of you who don’t remember the video game scene in 1990, that would be like making a Nintendo 64 version of a game that was coming out right now. Or for those of you who aren’t gamers, it would be like the Air Force training F-16 pilots on how to bring down a zeppelin. Or Avatar coming out on VHS. Or a new Spin Doctors album being made at all.

How does something like this happen? Were the hipsters in 1990 buying new Atari games to be ironic? Or was there some group of hardcore gameophiles who insisted the Atari games were just better somehow? And even if you still had an Atari 2600 and the arrival of Klax had gotten so excited that you dug it out from under the pile of Return of the Jedi action figures and Loverboy t-shirts it was buried under in your garage, where would you even go to buy the game… I mean, who still sold Atari 2600 games by then? Sears? Woolworths? I have to think it would be one of those perpetually behind-the-times stores that frequently forgot they even sold games. Hell, how would anyone have even found out about the Atari 2600 version of Klax in the first place? Did they have a magazine?

Perhaps a magazine that could also explain what the hell is going on in the background here?

Even more confusing about this whole thing is that the publisher who released the Atari 2600 version of Klax was… Atari. If anyone should have had first-hand knowledge about the obsolescence of the 2600, or the fact that the company who made it had already released multiple newer gaming consoles, it should have been themselves. It’s not like they didn’t have access to information on how few games were being sold for the thing, or the fact that fewer than 20 games had been released for it in 1988 and 1989 combined.

Still, if you were going to choose one game from 1990 that was going to be good enough to give the Atari 2600 it’s last hurrah, Klax isn’t a terrible choice. Kind of a cross between KaBoom!, Columns, and Tic-Tac-Toe, the goal is to catch falling tiles and match up three of them by color. Where things get interesting is that instead of placing falling tiles immediately as you would in most “falling piece” games, you can hold onto them, allowing you to plan more effective drops and set up combos. But what makes this tricky is that the pieces you catch stack on top of each other, essentially reversing their order, giving your brain one extra little thing to keep track of. The other tricky part? You actually have to go catch those tiles as they fall, which tests your dexterity and begins to seriously limit your options as things begin to speed up.

Most puzzle games (in fact, almost all), are built around repeating the same task over and over, which can get a little boring after a while. Klax has a pretty ingenious way of getting around this by altering the goal slightly each level. For some levels, it’s enough just to get a certain number of matches (or Klaxes as the game calls them). For others, you will have to survive through a certain number of tiles, or reach a certain score (different types of Klaxes have different point values). It’s enough to keep things fresh, without making any significant changes to the gameplay.  You know, the ol’ Soul Calibur sequel method.

Klax wasn’t a super-popular game, so finding a Genesis version might be a little tricky, but a good used game shop or flea market ought to have one, and probably at not too bad of a price. A better idea however for those of you who aren’t Genesis purists, however, might be to track down any of the multiple arcade compilations it has appeared in. We’d recommend Midway Arcade Treasures for the PS2 or Xbox, which can be had for about $10, and also includes several other kickass games (Root Beer Tapper and Rampage alone are worth the price of admission). Hardcore game collectors looking for the Atari 2600 version might be out of luck though – we couldn’t even find one for sale, let alone estimate a price, but it’s almost certainly a lot more than anyone in their right mind should pay for an Atari 2600 game.