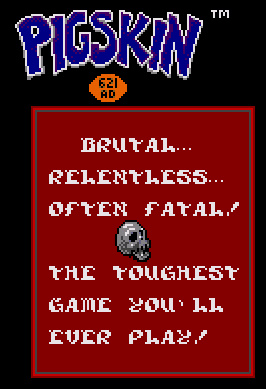 I’ve always had a soft spot for Jerry Glanville, going back all the way to his days as the coach of the Houston Oilers when he and Cincinnati Bengals coach Sam Wyche would run up the score on each other, and then rip each other in the media.  From there he moved on to Atlanta, where he brought the Falcons the run and shoot offense, their most successful season in over a decade, and most importantly, some of the slickest uniforms in the history of sports.

Let’s talk about those unis for a second.  Up here in Buffalo, we didn’t see Atlanta on TV much in those days, because they were, you know, the Atlanta Falcons – just another irrelevant, consistently mediocre team from the NFC with no real history or interesting players that the Bills would have to play every 3 years (Ironically, Falcons fans probably feel the same way about the Bills lately). You know, like the Buccaneers or the Cardinals.  I actually had no idea the Falcons had even changed uniforms until after the end of the season when they finally got onto a year-end highlight reel.  But the second I saw them, I mean, forget it – they looked BAD ASS.  I became a fan right then and there – instant conversion into a loyal, hardcore Atlanta Falcons fan.  Which wasn’t an easy thing to be in Buffalo, in 1990.  It’s not like you could log on to NFL.com to watch video clips of your favorite out of town teams and maybe order a some zubaz pants with their logo on it or something.  All you could do was try to catch the score at the bottom of the screen of whatever Cowboys or Giants game CBS was showing, and hope for the occasional highlight on a post-game show.  Plus, you had to deal with the abuse as Bills fans, cocky about their team for the first and only time in franchise history, constantly reminded you that the Falcons suck… and actually, many people in Buffalo have trouble with certain vowel sounds, so it usually sounded more like “Fulcans suck!”.  Yeah, I said it – Bills fans talk funny, and their team has won just as many Super Bowls as my sucky Fulcans.  Also, Beef on Weck tastes like salted shit. 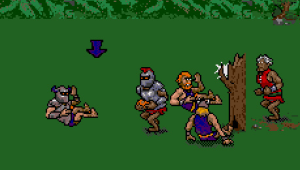 A typical Falcons practice in the pre-Glanville years.

But anyway – Jerry Glanville.  Most entertaining coach in the history of football as far as I’m concerned.  And not just because of the bitter rivalries with other coaches, or the great quotes (“He can be a great player in this league if he learns how to say two words: ‘I’m full.’”), or the keen fashion sense.  He almost always had these teams that would score touchdowns like crazy, but couldn’t play defense at all, and you’d end up seeing wild games where both teams would combine for close to 100 points.  It didn’t get him many 10 win seasons or playoff victories, but when you can get the boring, clock-control, grind-it-out Chicago Bears to score 41 points on you, at least you can say you’re taking a hit for the good of the league.

Having said all that, seeing his name attached to Pigskin is one of the more unusual endorsements in the world of video games.  For one thing, Pigskin is supposed to be set in the Dark Ages, so there’s a little bit of a timing issue there.  It’s kind of weird to see a picture of Jerry Glanville wearing his coach’s headset on the sideline of an NFL game, juxtaposed with an image of a medieval warrior catching a crude looking football. 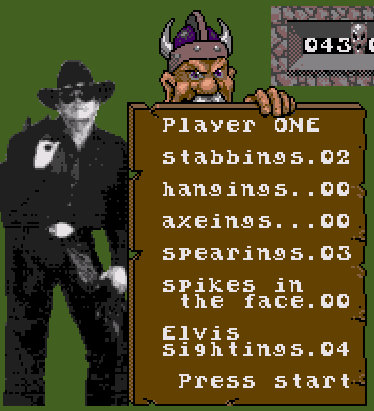 This picture of Jerry Glanville , however, doesn’t look out of place at all.

Also, the Falcons weren’t exactly the Cowboys, Giants, or 49ers in terms of popularity, and entertaining as he was, Glanville wasn’t exactly what you would consider a star.  Jerry Glanville was just famous enough that maybe he could have been endorsing used car dealerships in the metro Atlanta area, not Sega Genesis games being sold nationwide.  It would be kind of like seeing copies of NBA Jam with Don Nelson on the cover.  Although that’s really overstating Pigskin’s tenuous connection to the NFL.  It would actually be more like seeing Don Nelson endorse some kind of Pizza Hut special that was running during the NBA playoffs.

Strange marketing aside, Jerry Glanville’s Pigskin Footbrawl is a pretty good game.  The idea behind it is simple enough – it’s football set in the Dark Ages.  Which in this case means a 6-on-6, no-rules version of the sport where the action never stops, and it’s perfectly ok to punch other players in the face or even just straight up murder them.  In other words, it’s rugby.  Ok, maybe that was a bit of a cheap shot, but in all honesty, this game really does capture the essence of rugby – the frantic pace, the back and forth nature, and the apocalyptic levels of violence – better than pretty much any “real” rugby game I’ve ever played (admittedly, I’ve only tried two).

Nice to know in between dying of cholera and burning witches, someone has time to manicure the endzone grass into a putting green.

Obviously, it’s not a perfect rugby simulation – the scoring is different, forward passes are allowed, and, oh yeah, you probably can’t stab people in real rugby, but the whole thing has a good rugby vibe to it.  It’s not unlike the best EA Sports games of this era in that it manages to get just enough right to have the “feel” of the sport it’s trying to simulate, but without all of that realism coming in and sucking the fun out of things.  You know, basketball with more dunks, hockey with more breakaways, and rugby with more people getting hit with a mace.

That’s not to say the game is flawless.  Coming from an arcade heritage, there’s no season mode, or playoffs, or anything to really draw players in for more than just single game play.  Which is just as well, because after playing for about 5 minutes, you’ve pretty much seen and done everything there is to do in Pigskin.  In what is kind of an awkward acknowledgment of this shortcoming, the game even moves to an entirely different field in order to keep things fresh for the second half.  And if the second half only took 2 minutes, it would totally work.  Playing against another player keeps things interesting a bit longer, but even so, it would be hard to imagine anyone really sitting down and playing through a full 16 game schedule of this game.  Much like chocolate cake, this is best enjoyed in small doses – a little piece of it is delicious, but you wouldn’t want to eat the whole thing.  After a few days though, you’ll probably want to go back and have another slice. 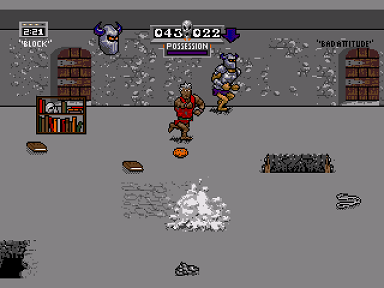 Hey, watch the bookshelves.  I have a first edition Beowulf in there.  It’s next to the skull.

Coming from little-known publisher Razorsoft, Pigskin wasn’t a huge hit in its day and didn’t sell a ton of copies.  Today, some sellers are trying to capitalize on its rarity by charging fairly absurd prices, but a quick scan of ebay, half.com or a decent flea market / used game store should still get you one for around ten bucks.  On it’s own merits, I’d call that price a little bit high (keep in mind, most Genny games are dirt cheap), but if you get a kick out of obscure games or just want a copy to show to your friends, it’s not a bad way to go.

So yeah… medieval rugby.  Brought to you by Jerry Glanville.  Hey, why not? 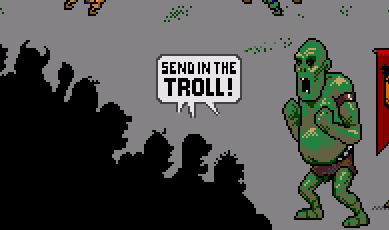