Since the late 80s, Splatterhouse has made its name with the copious amounts of blood, gore, and general grossness that appear in each game, and the third entry in the series is no exception.  If you want slime, guts, and what can best be described simply as “assorted crawly stuff”, then this game will have what you’re looking for.  Also, there’s a good chance you’re 12 years old.  Let’s face it – there does come a point in most people’s lives where this kind of stuff begins to lose it’s appeal, and seems more childish than scary.  Here’s my advice: if your kid is asking for this game for his birthday, and it’s more than a few months away, don’t get it for him.  He’ll likely have outgrown it by then. 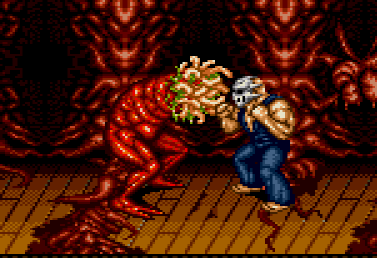 Also, since when do kids ask for games that came out before they were born?

I suppose that back in 1993 though, stuff like this might have seemed shocking and possibly even creeped players out a little.  Not like today, when you’ve likely seen things ten times more disturbing than anything in Splatterhouse simply by accidentally clicking the wrong link on YouTube.  The horror of fighting hordes of mutilated zombies in a blood-soaked mansion pales in comparison to the terror of accidentally watching some kind of not-quite-porn for people with very strange, and very specific fetishes, and following the suggested links on an online video site is often like a real life game of Minesweeper – 90% of them are fine, most the rest you know better than to click on, but then every so often you make a mistake and end up watching a video of a nurse pouring custard onto a schoolgirl.  That, my friends, is a kind of terror no video game can compete with.

Still, while the game might come across as being more silly than scary, it more than makes up for it with its gameplay.  Ditching the side-scrolling elements of the prior entries in the series, SH3 is a beat ‘em up style game, focused solely on brawling.  More importantly, though, it’s a really GOOD beat ‘em up, a feat which is harder to pull off than it sounds.  Games in this genre tend to be pretty similar, so design is everything, and the line between a really good game and a really bad one can get pretty thin.  Splatterhouse 3 excels due to a fast pace and a good balance of enemies – most of them being of the punching bag variety, with just enough tough ones mixed in to give the player a challenge.  A time limit further increases the need to hand out the beat-downs with ruthless efficiency.  As a result, you’ll often find yourself thinking “Man, I can’t believe how much ass I’m kicking!” while you make zombies’ heads explode with your fists.

And really, isn’t that exactly the right emotion to have while plowing through hordes of grotesque monsters in a haunted mansion?

In other words, this game is a lot closer to Final Fight than it is to, say, Cliffhanger, and that’s obviously a good thing.  Which is why we’re more than happy to overlook the fact that just about everything in the game looks like something that would get rejected from a Rob Zombie movie for being too cheesy.  Including the story.

Splatterhouse 3 begins five years after the previous game in the series with Rick, our protagonist, now married with a child,  They’re living comfortably in a mansion after he successfully transitioned from monster hunting to a lucrative career as a stockbroker.  This seems like kind of a strange career path to me, most people usually just study finance at a university and then get low paying entry level jobs.  Perhaps the demons you fought in the first two games were supposed to be metaphors for higher education, internships, and all the other challenges a person goes through before being ready to enter the modern workforce.  And in the third game, these monsters now symbolize the struggle of entering adulthood and settling down into a stable home life.

Then again, I might be giving WAY too much literary credit to a game with the word “Splatterhouse” in the title.

Anyway, things are going great until the monsters come back, take over the mansion, and kidnap Rick’s family.  Rick then does what he always does in these situations – dresses up in his Friday the 13th Halloween costume… er, I mean puts on the terror mask (apparently the blue coveralls are just what he happened to have on at the time, you know, during his normal everyday activities working on Wall Street) and sets out to kick some monster ass. 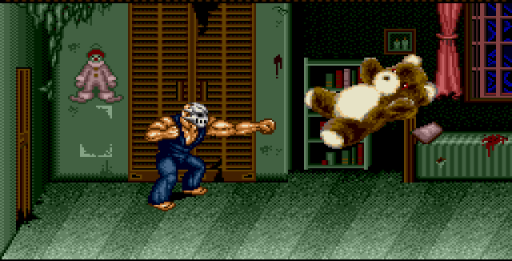 Which, sadly, is not at all similar to monster booty.

One thing you’ll realize as you make your way through the game is the impracticality of having a gigantic mansion with hundreds of rooms.  When every room is filled with traps and monsters, this can be something of a liability.  Think of it this way –  when I first got married, we lived in a five room apartment.  It got a little cramped sometimes, but I could rest assured knowing that if it ever turned out to be evil and haunted, and monsters kidnapped my wife and cats, they were only going to be one or two rooms away at the most.  That’s like, three, maybe four zombies I’d have to beat up to rescue them.  Even the average 2 story house only has what, ten rooms at the most?  You could probably kill that many monsters armed with a couple of heavy books or a pointy stick.

And even in non-monster circumstances, it doesn’t really make sense.  Rick has a wife and one kid.  That’s it.  How much space do they really need?  There is such a thing as having too much house, even if cost isn’t an issue.  You still have to furnish all those rooms.  So in addition to familiar-looking areas like a kitchen or dining room, there are plenty of rooms where they clearly didn’t know what to do with the extra space – one room is just filled with grandfather clocks, which looks kind of neat, but doesn’t really make any kind of sense if you think about it.  There’s another long room with no furniture at all, and the only adornment is one small portrait on the wall.  You start to get the feeling Rick and his wife probably ran out of ideas by about the 50th room or so. 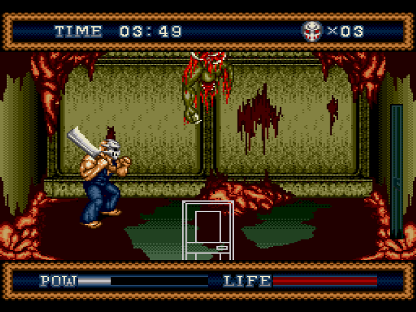 Either that, or the monsters kidnapped most of his furniture, too.

Not to mention the amount of maintenance a house this large would require, which was clearly an issue at Rick’s house.  The wallpaper is looking tattered, the paint is peeling, and some of the fixtures are clearly broken.  I suppose some of this could be blamed on the hellspawn running through his home, but probably not all of it.  I mean, it’s not like there’s an epic boss battle against a demon that eats drywall.

This was the last game in the Splatterhouse series (upcoming PS3 reboot notwithstanding), which is a shame because it’s also the only good one.  Who knows, maybe after this incident, Rick finally moved into a reasonably sized home, stopped taking directions from taking hockey masks, and hired professionals to take care of any future monster infestations (I hear the Belmonts resisted the allure of Wall Street and opted to stay in the family business).  Or maybe people just stopped playing beat ‘em ups, and Namco realized there might be more money in this new “Tekken” thing they were working on than it making sequels for a series that, at best, had a small cult following.  Either way, this game ended up being kind of rare, and commands a fairly respectable price in the online marketplace.  Still, if you’re a fan of the genre and ever have a chance to borrow it from a friend (thanks, Stryker), or see a cheap one at a garage sale, or just have loads of money to burn on old Genesis games, Splatterhouse 3 is worth checking out.