Anyone who’s ever played Tecmo Super Bowl on the ol’ NES knows that it was not the most realistic representation of NFL football.  The punters could kick the ball into the parking lot, the quarterbacks could throw the ball 80 yards and hit a receiver in full stride, and length of the field running plays were no surprise.  Fast quarterbacks dominated the league as rushers, since defenders would stay in pass coverage even as the QB ran by them.  And rather then base the difficulty on the quality of your opponent, the game got progressively harder every week, regardless of who you were playing.  Before you knew it, that mysterious “QB Bills” who was throwing all those incredible touchdown bombs in week one would do nothing but toss interceptions in the Super Bowl… although now that I think back, that part was kinda realistic.

Still, despite these frequent departures from reality, TSB was a huge hit with football fans.  It was sort of the perfect blend of a video game and a sports simulation – just barely realistic enough not to be considered “arcade”, yet still offering typical video game aspects such as having music during the action, and interrupting plays with cutscenes.  It was kind of like how exciting and highlight filled you thought football was when you were a little kid, before you grew up and got a enthusiasm killing dose of NFC power football with its thrilling 9-6 outcomes.  Or maybe it was more like the Arena League, with the obvious difference that people actually pay attention to Tecmo Super Bowl.

Perhaps the AFL just needs some of Tecmo’s Ninja Cheerleaders.

Either way, it’s amazing that while Tecmo Super Bowl remains one of the most beloved NES games of all time, its 16-bit follow-ups aren’t remembered as fondly, if they’re even remembered at all.  Many gamers think that this series died with the NES, and those who are aware of a Genesis or SNES version often remember Tecmo Super Bowl 2 or 3,  two games that ditched the old TSB formula in favor of trying to imitate Madden, and doing about as poor of a job at it as that fat idiot who used to be on Mad TV.

But believe it or not, the later consoles did get one good version of TSB, complete with everything you loved about it on the NES.  Want to throw length of the field touchdown bombs to Andre Rison?  You can do that here.  Want to see Barry Sanders dodge 20 tackles on his way to the end zone?  Check.  Want to dominate a game as Bo Jackson?  Well, too damn bad – by 1993 the only thing Bo knew anymore was career-ending hip injuries.  A real shame, too.  If he had stayed healthy, there’s no telling how many AFC Championship games the Raiders could have gotten blown out of.

You can’t see it in the picture, but he’s actually jumping out of the window of his burning mansion.

This actually brings up an interesting point – although the game stays pretty close to the formula that made it a success on the NES, it did come out two years later, so you’re getting an updated, 1993 version of the NFL instead of the 1991 season that the NES game was based on.  Whether or not this is a big deal depends on your favorite team. Some teams, like the Cowboys, are a lot better, while others, like the aforementioned Raiders, or the Eagles, lost key players and are on the downside.  Kansas City is kind of a wash – Christain Okoye is no longer the human wrecking ball he was in the original TSB, but this is offset by the addition of Hall of Famer QB Chiefs, who won 3 Super Bowls back when he was QB 49ers.  Detroit fans should probably just be happy that the NES version came out during the only year in the entire history of the Lions that they were any good.

And of course Bills fans can rest assured that the core players that made them the dominant team in the AFC are all still on the team and ready to bring home that one last Super Bowl loss.

Thanks to the 1991 Lions, there’s at least one year that Buffalo Bills fans can point to and say that the NFC Championship game wasn’t the “Real Super Bowl”.

As somebody who was in his early teens during the Tecmo Super Bowl era, I have a particular soft spot for these games.  These are from the years when I first really started caring about pro football, and each game is like a snapshot of the NFL that particular season.  I get a kick out of seeing games on the schedule and remembering watching them in real life, seeing players I haven’t thought about since I was in Jr. High, and scoring touchdowns with guys whose trading cards I might still have in my attic somewhere.  I get a little nostalgic thinking about the Eagles once-mighty defense, the Oilers Run and Shoot attack, or that freak year where the Atlanta Falcons were actually good.  I realize that “guys who were 15 when the game came out and liked football” is probably a pretty niche audience, but if you’re still reading  this far into an article about Tecmo Super Bowl on the Genesis, then chances are, you’re in that niche, too.

There’s really no simpler, or more effective way to say it:  This is Tecmo Super Bowl, almost exactly as you remember it on the NES, except for the Super Nintendo and Genesis.  What’s not to love? 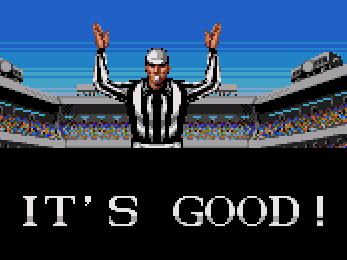