Tiny Toon Adventures:  They were tiny.  They were toony.  They were all a little looney.  ALL of them.  It was a show being made entirely by lunatics.  This was before Fox News existed, so that was kind of a novel concept at the time.

Few people remember it anymore, there was a brief period when Tiny Toons was kind of a big deal.  Critics raved about it, kids watched it, and a whole generation was introduced to the music of They Might Be Giants through it (at the time that was considered a good thing).  It’s almost hard to believe now, as the show only experienced a few years of popularity in the mid 90s before fading into obscurity.  Kind of like me in high school, actually. 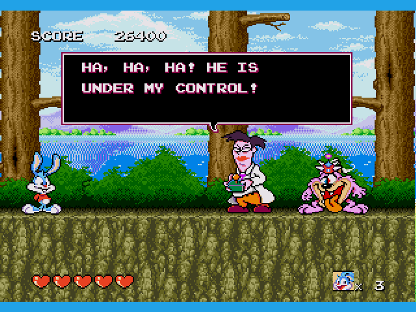 This mad scientist wasn’t on the show very much, but appears in the game with his nefarious mind control device to, I don’t know, make Dizzy Devil even more of a villain or something.

So we’ve all seen this formula, right?  Get the license to make a video game about a popular show kids like, create the game as cheaply and quickly as possible with little concern for quality, and then dump it out on the unsuspecting populace in time to ruin Christmas.  Because that’s the real motive of game publishers.

We’ve seen this dozens of times before, with the Power Rangers, with just about every Disney movie to come out during the Genesis era, hell, even with Garfield (note: my surprise at this isn’t because I would have expected a Garfield game to be awesome, but rather that some company even tried in the first place).  These games are invariably Mario-style platformers, with graphics that look barely like the licensed properties, bare-bones animation, and level designs that tend to be at best lazy and uninspired, and at worst, broken.  And there’s usually some bad control or sloppy hit detection to top it off.  Because an awful game without bad control is like a sundae without a cherry on top, or a tuna net without any dolphins in it.

Well, apparently Konami didn’t subscribe to this theory.  Or else they just figured that the Tiny Toons license wasn’t going to be enough to sell the game on its own and they were going to have to put a little effort in.  Whatever the reason, we have in Buster’s Hidden Treasure a beautiful, well-designed game that is actually fun to play.  If not for the fact that it’s a platformer, it would almost be the exact opposite of every other 16-bit game based on a cartoon.  For those of you who haven’t been paying attention, that’s like having a doctor tell you you have a rare disease that’s the exact opposite of cancer.  If that doesn’t make you wanna check this game out, I don’t know what will.

A haunted pirate ship, perhaps?  Not pictured: Knights, which also appear on the ship… for some reason.

Perhaps the key to succeeding where so many others have failed is that most licensed games get obsessive about re-creating the movie or show that its based on, often to detrimental effect.  Either they add a bunch of bad levels and gameplay elements that don’t really work in order to make it “just like the movie”, or else they end up coming up with some completely insane interpretive version of the subject matter in order to shoehorn it into the framework of the game.  Conversely, Buster’s Hidden Treasure looks like it was made by a group of people who were completely unfamiliar with Tiny Toons and were just working off a chart that listed every character ever to appear on the show, both minor and major, with Buster Bunny labeled as “Good Guy”, Montana Max labeled as “Bad Guy”, and everyone else labeled as “try to put into the game”.

Montana Max is a rich douchebag who, despite his wealth, dresses kind of like a hobo.

However, one aspect of the cartoon that the game doesn’t really seem to know who its target audience is.  For the most part, TTA seemed to be a show for younger children – it was about child relatives of popular Looney Tunes characters attending school after all – but it was constantly making pop culture references to R-rated movies, current events, and other stuff that only an older audience was going to get.  I mean, It’s hard to imagine a 7 year old sitting there going “Ha ha!  Bill Clinton DOES talk like that!”  And I can’t even imagine anyone under the age of 70 who was going to appreciate Babs Bunny’s desire to become a vaudeville-style comedienne, or a guest appearance by Henny Youngman.  By the way, I’ll give you one guess as to what kind of animal Henny Youngman was on this show.  Here’s a hint: Tiny Toons liked obvious gags.  Like, REALLY obvious ones.

Anyway, in the spirit of the show, the game starts out as if designed for a younger audience, with their favorite cartoon characters (assuming this was either back when the game first came out, or you’re raising your children in some kind of weird experiment where you make them think it’s 1993), happy music, bright colors, and moderate challenge.  Then, about halfway through the game, the difficulty triples, and you suddenly find yourself in levels where you have to make a long sequence of quick wall jumps over lava in order to get through a stage.

Sorry kid, come back when you’re a little older and develop some mad skillz.

Still, a Tiny Toons game that demands you be able to do wall jumps.  How cool is that?