There are very few shooters released anymore these days.  Most people say it’s because the genre is outdated, obsolete, and soon to go the way of PC adventure games or “pick fight off a menu”-style RPGs.  But I think there’s a different reason – developers finally discovered that each console really only needs one decent shooter, not because demand is low, but because once you pass a certain threshold of competence, there really isn’t much to differentiate them.  To have more than one good shooter on a console ends up being a bit redundant.

One way to understand this better is to think of shooters as being like pizza.  When pizza is bad, there’s almost no limit on just how bad it can be.  It might be burnt, greasy, or, in the case of the place down the street from me, the pizza may taste like somebody peed on it.  I’ve even been to a place in North Carolina that seems to use a crust made from communion wafers.  So, like shooters, when pizza is bad, it can get really bad, and you can pretty much tell right away.  But when pizza’s good… well, there’s kind of a limit on just how good it can be.  A pepperoni ceiling, if you will.  Good pizza is good pizza, and while some might be better than others, the differences end up pretty marginal.  Think about it – there might be three or four really good pizzerias near your house, but you probably go to the same one all the time, and its probably your favorite for reasons other than because their pizza is marginally better than the other ones.  Maybe they’re a bit cheaper, or you’re stalking the really cute girl who works there.  The place I usually go to is my favorite because it’s across the street from a liquor store that has the Viggo painting from Ghostbusters 2 in its window for reasons that nobody has ever been able to explain. 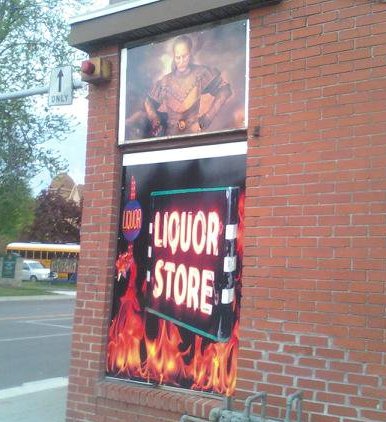 Also, they have their own parking lot, which is pretty handy.

If you can remember those two things, then you’re ready to go.  This isn’t like Grand Theft Auto, where you have to spend 3 hours learning how to ride a goddamn bicycle and driving your idiot friends around on their errands before you can punch your first granny.  There’s no slugging through 5 levels of crap in the hopes that it might get better once your guy is powered up and they start letting you play the “real” game.  Nope, you just turn it on and start dodging bullets.  Instant gratification.

Fire Shark’s story is a bit of a mystery.  Most of the stuff I’ve read about it online is really, really vague, hinting at cut communication lines and a possible invasion of the earth by… Aliens?  Germans?  Corporate superpowers?  We don’t really know.  There’s no intro or cut scenes to explain what’s going on, and we didn’t have a box or instructions to help us either.  Stryker claims he used to have a complete copy in his collection, but one day a customer came into his store and made an unbelievable cash offer for it ($7), so he sold that copy.  He eventually managed to find it again, but only the cartridge.  The label on the cart doesn’t even offer us any clues, as it’s a plain white label that simply says Fire Shark! on it.  That’s the pinnacle of marketing right there.

Similarly, during the Atari days, Combat was also the pinnacle of marketing

According to Stryker, who claims to have read the box once before selling it, it explained that you were some kind of mercenary pilot aiding the underdogs in a brutal civil war by flying missions for them in your biplane.  It’s possible that he’s remembering that correctly, but it’s equally possible that he’s confusing it with the time I told him about Count Carl Gustaf Ericsson von Rosen, and his role in the Nigerian/Biafra Civil War.  I’m going to go ahead and assume that 99% of the readership of a blog about Sega Genesis isn’t up to speed on all the obscure African wars to take place in the last 50 years, so here’s a brief summary.  Von Rosen was a Swedish count who in the late 1960s heard about the civil war in Nigerian and the way the rebel Biafrans were suffering cruelly. Much like today’s celebrities taking up similar causes of Rwanda and Darfur, he decided to do something about it.  Only instead of staging a U2 concert or a rally in Washington D.C. to protest it, the good Count hopped into a Cessna and started flying missions for the Biafran Air Force.  Combat missions.  Oh, one other thing – he WAS the Biafran Air Force.  Like the entire thing.  One guy (at least until he singlehandedly created the rest of their Air Force). Anyway, here’s a link to the wikipedia entry, but for a far more interesting article, check this out.

I assuming the Cessna he flew in was a 2-seater, so that there would be some place to put his gigantic balls.

Oddly enough, perhaps the best explanation of what’s going on in this game would be if it actually some kind of biographical account of the Count and his adventures fighting over Nigeria.  Think about it – while playing almost any shooter, we’ve always thought to ourselves, “Why would they send one lone fighter against an entire armada?” but here we have a real-life situation where it really was only one guy against an entire nation.  Of course, no company is going to release a shooter based on some obscure Swedish nobleman and his adventures fighting in a little-known war in a country that most gamers aren’t even 100% sure is real.  So even if this game really was meant to be about Count von Rosen, the “official” storyline to Fire Shark is probably about aliens or whatever. 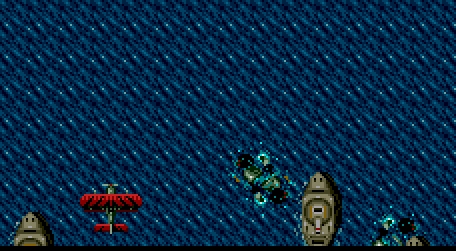 As is typical in articles about old Sega Genesis games, we’ve spent most of our time discussing Africa and pizza.  But what about Fire Shark?  Well, it’s a very good shooter, and as I said before, every console needs one.  There were actually a few really good shooters on the Genesis, and had Fire Shark not existed, any one of them could have been considered of the the Genesis’ Top 50 Games.  But as we established before, we really only needed one.  Compared to the others, Fire Shark is more interesting, the challenge is better balanced, and the music just kicks a lot more ass.  Every Genesis enthusiast ought to check this one out, as it’s a perfect example of old-school gaming doing what it does best – accessible, straightforward fun.  Even on a machine that is best known (and loved) for innovative and unique games, it’s always nice to mix in an occasional dose of some well executed, familiar gameplay.

In other words, not only is Fire Shark the Genesis’ best shooter, it’s also my favorite game that may or may not be based on a real life one-man air force.