Brad: When we first started reviewing old Genesis games, this game practically jumped off the list as the one we’d have the easiest time writing about.  I mean, a game about Michael Jackson rescuing kidnapped children?  The jokes practically write themselves, right?  But then he went and died before we got a chance to write this article.  Now all of a sudden America remembers how much it loved MJ, and nobody wants to spend much time dwelling on some of the more unsavory accusations that surrounded the man throughout the past 20 years.  It’s almost as though jokes about children being molested are no longer considered to be in good taste.

But that’s ok, because Michael Jackson’s Moonwalker is a strange enough game to poke fun at without resorting to a bunch of tired jokes like “Who’s Michael rescuing the children from?  Himself?”  This is a magical game where you get to do the Thriller dance with zombies, infiltrate the criminal hideout from the Smooth Criminal video, and kick rival gang members in the crotch.  It’s pretty much everything we’ve ever wanted to do as the King of Pop.

As an aside, I grew up in a region of the country that refers to soda as “pop”, so anytime I hear the phrase “King of Pop”, my mind automatically drifts more towards Coke and Pepsi products than to “Beat It” and “Bad”.  I tend to picture someone kind of like the Burger King mascot, except hopped up on caffeine and sugar, and with more missing teeth.  And I bet you always thought the Burger King couldn’t get any scarier.

Moonwalker is kind of an action game, in which you need to explore each level to find a certain number of children, while fighting off various enemies.  You might not think of Michael Jackson as a particularly capable fighter, but you have to remember that the guy has star power.  As in, he can throw stars at people.  Magic stars that adhere to enemies like napalm as they burn through their flesh.  Well, it doesn’t actually show that part.  But it seems like a reasonable assumption.  The important thing is that the stars kill your enemies.

Instead of throwing, Michael usually prefers to shoot stars at his enemies using a super-fabulous kick.  And if someone gets too close to him, he’ll forgo the stars entirely and just kick them in the balls.  And no, this isn’t some kind of graphical glitch like in Wolverine: Adamantium Rage where every so often, if things line up just right, it kinda looks like maybe he might have accidentally kicked someone in the groin.  MJ is pretty blatantly blasting people in the package here.  Let me put it to you this way – Sophita from Soul Calibur thinks Michael Jackson fights dirty. 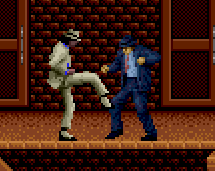 Now for the longest time, I’ve wanted to play a game with a character who ONLY fights dirty, so I would have been perfectly happy seeing Michael Jackson round out his arsenal with some eye-gouging and hair pulling, but the developers had something far more interesting in mind.  Let me ask you something – what is MJ’s real weapon?  If you answered roofies, congratulations, America now hates you.  I mean, what is the power that allows him to break windows, frame private investigators, and unite rival street gangs into one super-gang entirely under his control?  That’s right, dance.

Pressing the A button makes Michael Jackson spin in place, turning him into a tornado of destruction, not unlike the Tazmanian Devil, except immobile.  Although it only works if your enemy is already within testicle punting range, it’s still a very effective attack because your enemies have a tendency to walk into you while you’re doing it.  Perhaps it creates some kind of vortex that sucks them in.  Or maybe they’re just so overwhelmed by its awesomeness that they have to take a closer look.  More likely, the game’s AI just isn’t very good. However, just like in real life, spinning drains Michael’s life force, and too much spinning can kill him.  Which is a lesson we learned all too tragically last summer.

Still, it’s often worth the risk, because if you spin long enough – in fact, about half of a life bar’s worth – you, and every enemy on screen, will break into one of Michael’s famous dance routines from the videos.  There’s a different one for each level, so if rescuing children by becoming a human tornado isn’t already enough to motivate you to play through at least to level 3, there’s still the prospect of doing the Thriller dance.  And if that still somehow doesn’t make you want to play this game then I don’t know how you’re reading this because you’re dead.  And even then, you should still want to do the Thriller dance.

This will never not be awesome.

Besides, you gain a good chunk of life back every time you rescue a child, so it almost seems like a waste to rescue one while you have a full life bar.  You’d essentially be passing up a free opportunity to dance.

Still, it’s not easy being Michael Jackson, even in a fantasy world without tabloid newspapers.  The game came out in 1990, and in what could be considered foreshadowing of the next few years, every single person in the game is hell-bent on preventing Michael Jackson from getting near their children.  So much so that they will hide kids in the trunks of their cars and open graves.  And unlike the music videos these levels are loosely based on, criminals and zombies in this game are quite willing to do more than just dance at you menacingly.  Even cats and dogs will attack you without provocation.  That’s actually one of the lesser known problems with being a famous musician in the 1980s – animals keep trying to kill you… actually, that reminds me of one other thing – every computer Michael Jackson gets close to explodes.  Computers can be such dicks sometimes.

Finally, it’s worth noting that this game came out right at the very peak of Michael Jackson’s tendency to yell “Wooo!” and this is reflected in the game.  A creepy, oddly animated picture of Michael “wooos” before the beginning of every stage.  Pressing up on the d-pad makes Michael thrust his crotch out and yell “Wooo!” – which seems like a mildly inappropriate thing to do when he’s near children, although then again, it kinda seems like an inappropriate thing to anytime.  And when MJ needs to open a door, he doesn’t just open it, he spins to it, yells “Wooo!” and then opens it while crotch thrusting.  I only bring this up as a warning – the habit seems to be somewhat contagious, and ever since playing the game, I’ve sounded like Ric Flair with Tourette’s Syndrome.  I realize that joke probably went over 90% of your heads, and the rest of you probably thought it was pretty bad anyway, so let me try again:  since playing this game, I been sued for sexual harassment by 4 different people that I’ve opened doors for. 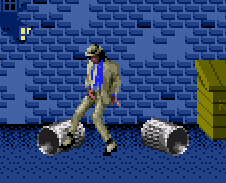 He’s not grabbing himself – he’s taunting one of the enemies he just crotch-punted.

Stryker: What Brad fails to mention is that both of us got bored and stopped playing by the fourth level.  Wandering around compact levels opening doors while “fighting” brain-dead enemies is decent fun for a little while, but the longer it went on, the more and more we started to lose interest.  Not unlike MJ’s career, actually.