Brad: Usually when you take a couple of things that are great individually and combine them together, one of two things happens.  Either they’re totally awesome – think Reese’s Peanut Butter Cups – or else they’re incompatible and it’s a complete disaster, like chocolate cake and hardcore pornography.  Although to be fair, chocolate cake doesn’t really combine well with much of anything.  Anyway, for whatever reason, there usually isn’t much of a middle ground in these situations, just one of the two extremes.  So when I tell you that Mega Turrican combines gameplay from two beloved NES classics, Contra and Bionic Commando, it is a reason for both excitement and trepidation, kind of like the feeling you would get if you were going to a NHL game but the arena was in a really bad neighborhood.  You know, like the New Jersey Devils.  Except I don’t know that if anyone would actually get excited about going to a hockey game involving the Devils.  So more like going to a Detroit Red Wings game, I guess…  I mean, assuming they weren’t playing the Devils that night. 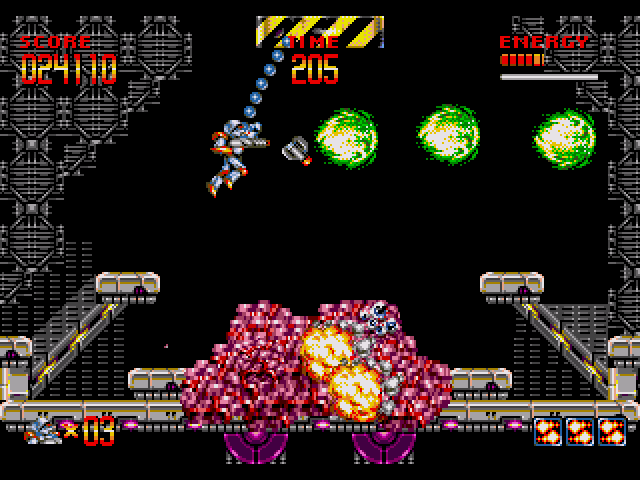 Hey, don’t ask me how a giant missile came out of that little gun.  It just did.

The weird thing about Mega Turrican, however, is that it is neither great nor terrible.  It’s just pretty good.  Which is all very confusing in a way.  Simple mathematics tell us that Bionic Commando plus Contra should equal awesome.  There are some things that would explain a deviation from that formula, but none of them fit – the styles of gameplay complement each other rather nicely, and the execution of this concept is handled pretty well.  So the conclusion we have to draw is that Mega Turrican is somehow breaking the laws of mathematics, and that can’t possibly be good.  Because once people stop respecting the law, we’ll have anarchy.  Not exactly sure how that works with the laws of math – maybe 2+2 will start equaling 7.  Or maybe it means that Isaac Newton will rise from the grave and stab you in the leg.  Neither one is desirable.

What can explain this, then?  How can a game that combines the best aspects of two awesome games, and executes this concept seamlessly, be anything other that the greatest game ever made?  We’ll probably never know for sure, but this screenshot from the intro may provide a clue: 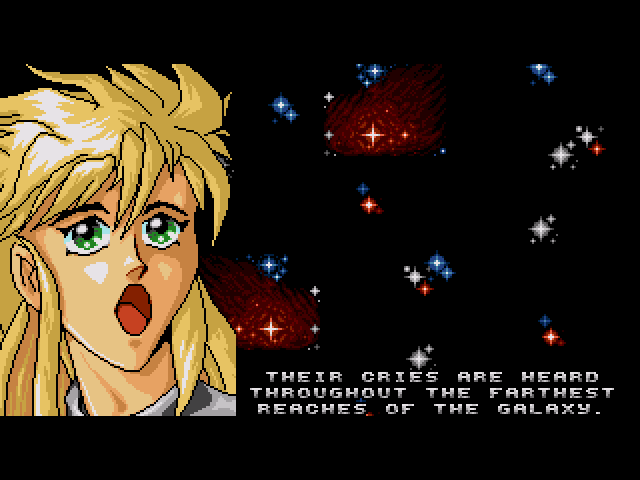 So there you go.  Just goes to prove that an anime influence can ruin anything.

Or maybe not.  A closer look revels that Mega Turrican’s problem might be that the idea of “combining” two games seems to have been lost on the developers.  The game starts off strong, with the first stage blending the rope swinging of Bionic Commando with the frantic, run and gun action of Contra.  But then the next two stages abandon the swinging almost entirely, and the stage after that relies on it almost exclusively with little action at all.  One might conclude that a world designed by Factor 5 would be dreadful one devoid of true combinations of any sort – a package of Reese’s Cup would come with one all peanut butter one and one all chocolate, instead of narwhals we would have only unicorns and whales. And Combos… well, there wouldn’t even be Combos.  It’s almost too tragic to imagine. 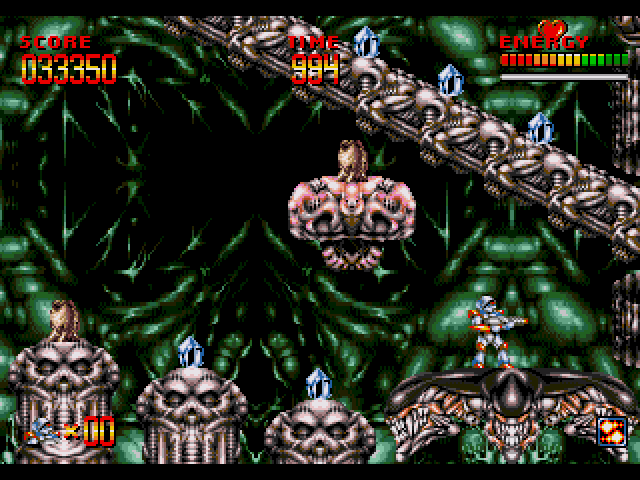 Stryker: One other reason this game may not have lived up to expectations is that it both of the games it took influence from were really well-made, and Mega Turrican, while not bad, isn’t quite up to those high standards.  Sure, it’s like Contra, but it isn’t nearly as good as Contra, and the same can be said of the Bionic Commando aspects as well.  If these styles had been blended more fluidly, it wouldn’t have been as noticeable, but taken separately as they generally are, it sticks out.  You’re basically playing one level that’s a knock-off of one game, followed by a level that’s a lesser version of the other.