On a system as oversaturated with platforming games as the Genesis was, every one of them needs something to help set itself apart from the crowd.  In a perfect world, that “something” would be really, really good gameplay.  But then again, if every one of them had really good gameplay, none of them would actually stand out from the crowd at all since they’d all be awesome.  In such a scenario, a game that wanted to stand out would actually have to be really, really bad on purpose.  This is the kind of thought process that leads to games like Risky Woods, at which point my whole theory collapses on itself because, by definition, Risky Woods could not exist in a perfect world.

Since its not possible for every game to stand out by being great, many instead rely on gimmicks – movie licenses, quirky characters, innovative gameplay mechanics.  And as far a gimmicks go, putting Disney characters into your game isn’t a bad way to go – the kids love them.  Or at least parents seem to think kids love them.  I don’t know, when I was a kid the things I thought were cool were He-Man, Ninja Turtles and Bon Jovi.  Not Mickey.  But parents are the ones buying the games, which is why we ended up with a dozen games starring Mickey Mouse and not a single one with Bon Jovi.  By the way, I really wish there was a synonym for “Bon Jovi” – that last sentence would have flowed a little better.

Anyway, it’s the end of the line for our remaining Disney titles, World of Illusion Starring Mickey Mouse and Donald Duck, Quackshot Starring Donald Duck and The Great Circus Mystery: Starring Mickey and Minnie.  Because the games are fairly similar in nature, we figured a lengthy elimination article for each one was unnecessary, and instead gathered the staff together to dish out some swift justice.

Brad: Like all things Disney, I really dug this game’s visuals, but found most of the rest kind of shallow.  One cannot help but get cynical when considering the unfairness of the level layouts – this game was designed for children who, not knowing any better, will probably blame themselves for every cheap shot Mickey and Donald absorb.  It’s not hard to convince kids that the problem is they suck at playing games, not that you suck at making them.

Stryker: Old Man Murray once ran a feature in which they judged popular PC games (mostly FPS) based on how far into the game you could get before the appearance of the first crate, “which represents the point where the developers ran out of ideas.”  Substitute crates with underwater or ice levels, and you have a pretty effective way to judge 16-bit platformers as well.  And by this standard, World of Illusion does very, very poorly.

Mr. Do!: Hey, kids!  Want to play a fucking horrible game with lots of cheap deaths and characters who move slower than your Grandmother during a Wheel of Fortune marathon?  No?  What if you got to be Mickey?  Great!  Go ask your parents for $50, ‘cause I’ve got a game for you…

Brad: I guess my main problem isn’t with the game itself, but with Donald’s sailor outfit.  I’ve seen cartoon characters in military uniforms before.  And I’ve seen cartoon characters that don’t wear pants.  But combining the two?  What kind of navy wouldn’t include pants as part of the uniform?  Then again, what navy would recruit a duck?  The whole concept is madness.

Stryker: I realize that to make the game kid-friendly, they couldn’t have Donald running around blasting everything like it was Doom (even though he basically does later on in the game when he gets some better weapons), but a toilet plunger gun?  You do realize what a toilet plunger is for, right?  Let’s just say that if you need to use one, the water you’re putting it into probably isn’t very sanitary.  In a way, I find this primitive biological warfare far more disturbing than if Donald were to just shoot his enemies in the face with a regular gun.

Mr. Do!: Why is Donald so pissed off all time time?  Probably because they keep putting him in average Genesis games with goddamn awful puns in the title.

Brad: The real mystery is – who goes to the circus anymore, anyway?  Mickey and Minnie do.  Because they do lame things.  And if you’re playing this game, than apparently you do, too. 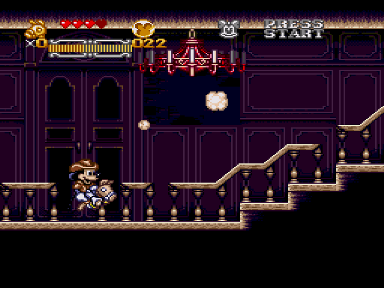 Stryker: At this point in the project, I’m completely out of original ways to say “decent platformer but nothing special.”  I know, I’ll try it in German:  anständiger platformer aber nichts Spezielles.  Hmm, apparently “special” is a proper noun in German.  Learn something new every day.

Mr. Do!: This is the best out of the three games, but… and you probably already know where this is going… anyway, that’s really like being the sardine filling in a fish-flavored Oreo.