Brad: The first Toe Jam and Earl wasn’t like other games.  It was an overhead-view game with a heavy emphasis on exploration and a lot of humor.  In fact, the game was primarily a joke delivery platform – you’d walk around each stage looking for the exit, and stumble across various funny parts in your travels.  Gamers appreciated the humor, but they really loved the fact that it wasn’t yet another game where you mindlessly walked from left to right punching or shooting things or jumping over pits.  You were free to go left or right.  Or up and down.  In fact, the game demanded it.

So what did they do for the sequel?  They made a game where you mindlessly walk from left to right shooting things and jumping over stuff. 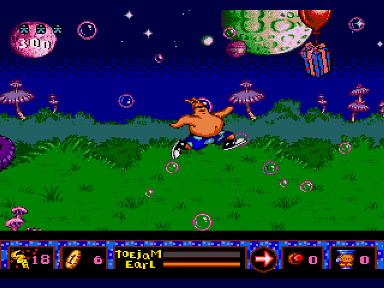 Oh nice.  Now it’s like every other game ever.

Don’t get me wrong – I understand the dilemma here.  Panic on Funkotron is an attempt to make a follow-up to a game that people liked specifically because it wasn’t like anything else out there.  By definition, that’s an impossible thing to recreate in a sequel.  Your first choice then is usually just to give everyone more of the same and hope you’ve discovered the next hot thing, and not just a one-time novelty that people will grow tired of.  Sometimes this works (Doom), but more often than not it doesn’t (We Love Katamari).  Or you can try to evolve your original concept from the first game even further, but then you run the risk of changing the game too much and making it unrecognizable (Super Mario Bros. 2).  But the one thing you absolutely cannot do is just take the characters and story from the first game and dump them into a completely mediocre platformer.  This last approach has the dual effect of further bloating an already overcrowded genre while simultaneously alienating all your fans.

But of course, ruining the franchise was totally the Sega thing to do.

Stryker: Back where I come from, we have an expression: “You gotta dance with the girl that brung ya.”  What that means is that if doing something gets you somewhere, you stick with it until it stops working.  Sega should have heeded that advice and stayed with the original TJ&E formula. 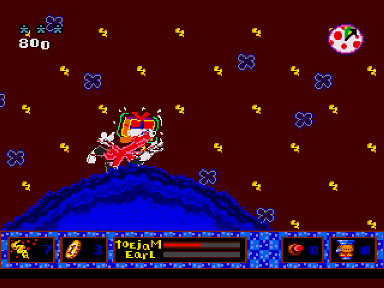 Odd, the original didn’t have a bonus “Terrible Graphics Mode”.

Brad: What if it’s like my first high school dance and the girl that brung ya decides at the last minute to dump you off on one of her ugly friends to hook up with some other guy?  I didn’t get to dance with her.

Stryker: Hmm, I don’t know how that works into the metaphor exactly, but you probably should have said something to her.  And then kicked the other guy’s ass.

Brad: Well, she didn’t tell me what was going on, so I mostly spent the night getting snubbed by her and wondering why her friend was stalking me.  I’d love to say that I had enough pride to go into a jealous rage over the other dude, but mostly I spent the night thinking that school dances were a lot more confusing than I had anticipated.