Race Drivin’ is a unique game in a lot of ways. Oh sure, it’s the sequel to Hard Drivin’, and uses so much recycled content from its predecessor that it’s hard to tell the two apart, but compared to other Genesis games, there’s a lot of originality. For one thing, it’s one of very few games to attempt 3D graphics on the Genesis. That’s actually not as good of an idea as it may sound. Think about it – Starfox proved that the Super Nintendo couldn’t handle 3D graphics without making everything look like ass. You can’t really expect a Genesis, the Super Nintendo’s retarded half-brother, to do a better job, can you?

It’s also one of very, very few games to simulate driving a car with no brakes, and almost certainly the only one to simulate doing so while high on hallucinogenic drugs. 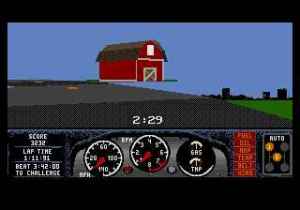 It’s kind of unusual to see 3D graphics this bad outside of a Dire Straits video.

Or at least I think it’s supposed to be simulating a drug-induced trip, since taking a spin down any of the tracks in Race Drivin’ is a journey into madness. At times, the road rises to incredible heights and floats in midair with nothing underneath to support it. Severely banked turns rise out of the ground like roller coaster tracks while moving vans perform soaring jumps over wide gaps in the background. While much of this insanity can be explained by the game’s limited 3D graphics engine, some of it was clearly a conscious decision. A road that just kind of hovers in the air might be the result of the Genesis not being powerful enough to draw the ground underneath it, but once somebody decides that the airborne highway needs a barn and some trees floating in midair next to it for scenery; you’ve crossed the line into willful insanity.

By the way, do you know what would come in handy when you’re driving a car down a road that’s floating in midair and has no guardrails? Brakes. They allow you to slow down the car, or better yet, just stop it entirely and just wait for the LSD to wear off. According to the game’s instructions, the B button is for brakes, but pushing it only resulted in an annoying noise that I guess was supposed to be tires screeching, with no noticeable effect on the speed of the car. I’m inclined to say these controls were unrealistic, but who knows? Maybe the physics are different on a road that’s tilted sideways at a crazy angle while floating in mid-air.