With Sonic Week over, it’s nice to return the normal flow of things and get back to our Wednesday ritual of knocking off 10 games with minimal explanation.Let’s get to work:

Road Blasters – Why would I ever need a home version of Road Blasters?Even 20 years later, I still run into this coin-op machine everywhere I go.

Super Volleyball – One guy on each team does virtually all the work, while his teammates stand around aimlessly by the net and hardly ever move.Was this supposed to be a simulation of gym class?

Gods – Sorry, but I have a hard time taking a game serious when it lists Hermes as one of the “Top 10 Gods”.Hermes sucks. 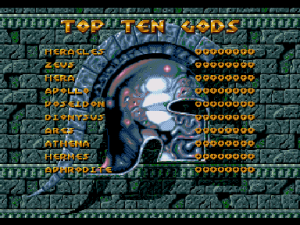 ESWAT: City Under Siege – In the dystopian future, our streets will be filled by criminals who openly carry machine guns, bottomless pits will be placed in between every building, and cops will only be able to shoot in 3 directions.

Olympic Winter Games: Lillehammer ’94 – Without the ability to club your opponent on the knee, it just doesn’t give you the full Olympics experience we were hoping for.

Dynamite Duke – The makers of Duke Nukem could probably sue for copyright infringement if they weren’t so afraid of pointing out any similarities between their own game and this abomination.

Air Diver – Did allow me do try one thing I’ve always wanted to do in a game – declare war on the Pacific Ocean.Take that, you wavy bastard!